GNOME 42 is here, but its new look and feel doesn’t yet include all of the environment. This is already causing rumblings of discontent.

This release is significant because soon it will be the default desktop of the next Long Term Support (LTS) version of Ubuntu. That means a lot of people will be looking at GNOME 42 every day until 2024.

GNOME 42 will also be the default in Fedora 36, though Fedora doesn’t have LTS versions. A new version comes along twice a year so Fedora 37 will almost certainly have GNOME 43. If the GNOME-using members of the Red Hat community don’t like the look of 42, they won’t have to put up with it for long, but Ubuntu users must, or switch to the short-term support channel, which may not be viable for everyone.

As we mentioned in the GNOME 42 preview, the new look isn’t just an easily changed theme. Like many modern desktops, GNOME uses a lot of web technology.

GNOME themes were described using CSS. Since GNOME 3, the default GNOME theme was Adwaita, and it was easy to install new ones, and there were lots to choose from.

Now that has changed. One component of GNOME 40 and later releases is version 4 of the Gtk toolkit. Along with Gtk 4 came a new library called libadwaita. This embeds the formerly separate Adwaita theme, effectively enforcing it across all apps that use Gtk 4. The purpose of this is to help developers conform to the new GNOME Human Interface guidelines.

You can still install themes, of course, but they will only affect apps that use Gtk 3. The slight snag in version 42 is that some components of the GNOME desktop itself still use Gtk 3 – notably, the Files program (still internally called Nautilus). This means that the file manager doesn’t match the new look and feel, and if you attempt to customize it, the mismatch will get worse. 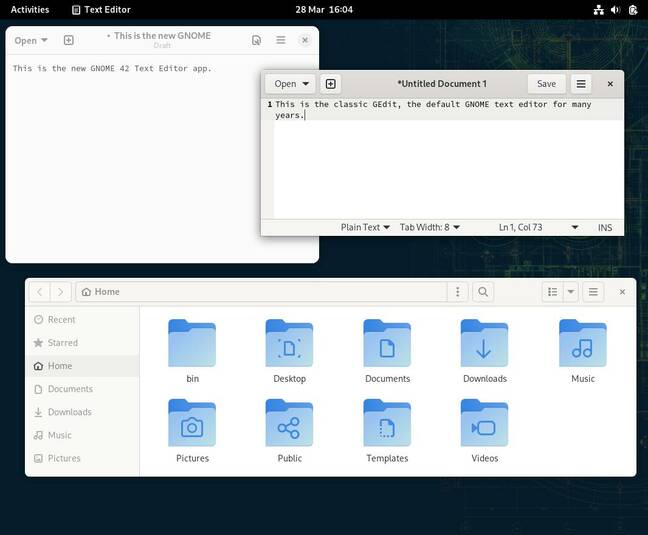 The screenshot above shows the difference. At top left is the new Text Editor app, complete with heavily rounded window corners and flat, borderless control buttons. At top right is the older GEdit, and beneath it a Files window. The styling is a mixture: GEdit’s top corners are less rounded and its bottom corners are square. Files has GEdit’s slightly rounded corners, but the controls in its CSD pseudo-title bar have borders, unlike the more modern Text Editor.

The differences are slight, and many people probably would never notice it. Your humble vulture is among them: personally, I’ve loathed “themes” and “skins” since my first encounter with them in the otherwise-excellent Trillian on Windows 2000.

Windows XP made theming part of Windows and was thus a strong incentive to switch to Linux, or Mac OS X, or indeed anything else. Makali’s comment to Jamie Zawinski pretty much covers it for this writer.

Ever since Windows 8’s flat look led even Apple to abandon its old skeuomorphic appearance and flatten iOS 7, it’s been cool to be flat… whatever the cost.

The problem now is that the newer, ever-flatter look of GNOME 40+ is also causing unhappiness and drama… and now there’s very little you can do about it. ®

Security upgrades for seven Longview schools gets board approval | Education

How Spacewar Launched a Revolution