Warning: unlink(/tmp/jnewslibrary-xa3pMH.tmp): No such file or directory in /home/syyfiiaq/satoripulse.com/wp-admin/includes/class-wp-filesystem-ftpext.php on line 142

Is AI a Positive Disruption in Legal? | AXDRAFT (an Onit company)


The word “disruption” triggers heavy, often negative, images or connotations. Almost no one likes disruptions, such as not being able to go to work due to illness or Netflix lagging due to bad internet as you’re trying to watch Lucifer. And even over the past two months, the lives of millions of people have been disrupted due to war and conflict. The instability and uncertainty that are generated by disruption can be extremely unsettling.

But as much as we fear and dislike disruption, there’s also plenty of reason to enjoy and even celebrate disruption. That’s because the definition of disruption is a break in the status quo, or some interruption in the normal way of carrying out some activity.

In other words, there’s no reason why disruption must always be bad. There are many cases when disruption has been a force of good that has greatly enriched the lives of everyday, ordinary people.

The definition of disruption is a break in the status quo, or some interruption in the normal way of carrying out some activity.

In general terms, innovation can be described as creating something that generates value. To complete the loop, the amount of value generated often depends on how innovative that something is.

Innovations can occur with both emerging as well as time-tested tech. An example of the former might be augmented or virtual reality, while cell phones and smartphones are an instance of the latter (keeping in mind that telephones were invented in 1876). It’s also possible that an innovation can be the result of combining both emerging and established tech.

When it comes to innovation, there’s no “one-size-fits-all” definition. Just like we mentioned that innovation can appear from emerging tech, established tech, or a mix of the two, there are also several types of innovation. Some are small steps that build off of previous ones, whereas others are massive, life-altering, game-changing leaps (you know, “One small step for man, one giant leap for mankind”).

There are many ways to categorize innovation. But one of the simpler approaches is to think about it as if it were a graph. On the y-axis, you have the “newness” of the technology. In other words, how young and novel it is. On the x-axis, it’s the impact the product or service will have on the market. 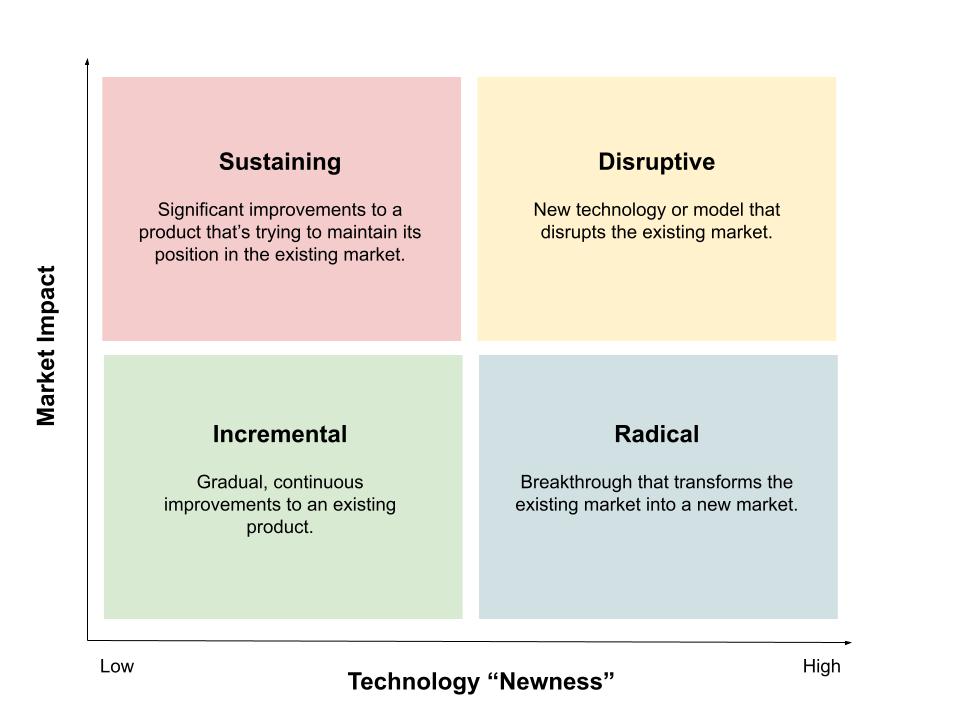 Let’s explore each quadrant in a bit more detail.

Incremental innovation can best be described as a gradual, continuous improvement of whatever products and services currently exist. New products or concepts aren’t created. Instead, only small, marginal improvements take place.

It’s nowhere near as flashy or sexy as its radical and disruptive cousins, but incremental innovation ensures that a company avoids stagnation and that its bottom line continues to grow.

An example of this would be Gillette razors. The act of shaving has been around for centuries, and one of the first “modern” razors was invented in the 1760s. Flash-forward 260 years and not much has changed. It’s still a blade on a stick that’s meant to cut hair.

Yet Gillette consistently finds ways to innovate, whether it’s by inserting an additional blade, installing a pivoting head, or adding vibration and heat functionality. Each of these small changes is a good example of incremental innovation.

Like incremental innovation, sustaining innovation uses “older” tech. However, whereas incremental uses small steps to add value, sustaining tries to reimagine new purposes for what presently exists. To some extent, this may even occur as a natural part of scaling, upgrading, or optimization. The hope is that large-scale changes will result in better-performing products that lead to a significant gain in the market share. Laptops are a clear example of sustaining innovation. The characteristics and capabilities of many laptops are roughly equal to those of personal desktop computers. But while their performance is largely the same, laptops offer a high degree of portability, something that PCs don’t have.

Then there’s radical innovation. It capitalizes on a technological breakthrough that can transform industries while creating entirely new markets.

Perhaps the most famous example of a radical innovation is the iPhone, which completely transformed the cell phone industry while creating a niche market of smartphone users. At the time, Blackberry was one of the leading names. The device was impressive enough that it was the go-to choice for professionals who needed to email and text on the go, often winning over trendy flip-phones like older Motorola Razrs and swivel phones like Samsung’s X830. It was ubiquitous enough that even the former U.S. President Barack Obama famously used a Blackberry during his term at the White House.

The fall of Blackberry is a cautionary tale to learn from. In the face of such a massive radical innovation, companies must evolve or get left behind. Blackberry ultimately chose not to, sticking to characteristic features like its small physical keyboard. Initial flaws in the iPhone’s early designs, like rapid battery drain and a glitchy digital keyboard, led Blackberry to consider the iPhone a non-threat. And in the end, as we all know, once the initial flaws were worked out, iPhones (and smartphones as a whole)asserted dominance over the market.

Disruptive innovation is strongly related to radical innovation. Like the latter, the former also capitalizes on a technological breakthrough. But unlike the latter, it affects (or “disrupts”) the current, existing market.

Something to keep in mind is that it can take years for disruptive innovations to fully mature. Netflix, for example, spent several years as a rental video mail service, and even when it transitioned to streaming it was several more years before it gained traction. It’s for this reason some argue that cryptocurrencies are a disruptive innovation, considering how easily, cheaply, and quickly money can be sent across borders (faster than both SWIFT and SEPA).

AI as a positive disruption for the legal industry

Artificial intelligence can be described as one of the most important disruptive technologies, if not the most, of the Fourth Industrial Revolution. Anything that relies on or is built using machine learning, deep learning, artificial neural networks, facial recognition, or natural language processing is ultimately dependent on AI.

Rarely does a day go by when we don’t see mention of one of the more popular uses of AI, such as digital assistants (Siri, Alexa, Cortana), self-driving cars, Roombas, or vehicle recognition (although vehicle recognition might not be as popular, if you recently got a speeding ticket, it might have been the result of AI). We even hear about how AI can address labor shortages for certain industries, such as agriculture.

One thing is for certain: AI has already disrupted the legal industry. When used, it has helped cut down on contract costs and routine work, as well as legal research and outcome predictions.

So if AI is already a disruption for the legal industry, how can AI prove to be a positive disruption?

To some extent, we can look to the health industry. Technology is being deployed to augment the care provided by health organizations. Many of us who have been to a hospital or clinic are intimately familiar with the queues, paperwork, and wait times associated with each visit. When acquiring health tech, organizations search for something that can easily integrate into their current workflows while improving efficiency without sacrificing the quality of care. If successful, patients win.

Legal tech is no different. If it can be added easily without generating its own problems, and if efficiency improves while ensuring legal affairs are in order, the clients win.

Numerous legal professionals have raised ethical and legal concerns regarding the use of AI, especially about data sets and potential biases within the data. And due to the complexity of the algorithms used, many lawyers can’t easily understand why an AI system does what it does.

Still, some of the biggest fears and concerns about AI – that it’s challenging to implement, that it isn’t accurate enough, and that it’ll replace people – are more misconceptions than truth.

AI and its many subsets are often perceived as difficult because vast data sets and countless hours are required to train an AI to the point where it can be used. Fortunately, legal companies don’t need to worry about this, because that’s where legal tech companies like AXDRAFT get involved. We specialize in working with and processing the data to ensure that an AI is kept up to date. All that’s needed is for legal companies to integrate it as they need.

Some of the biggest fears and concerns about AI – that it’s challenging to implement, that it isn’t accurate enough, and that it’ll replace people – are more misconceptions than truth.

And when it comes to lack of accuracy, tech companies give their all to ensure that their AI can minimize any mistakes. That’s also why job insecurity is another misconception—there are plenty of things that AI can’t effectively do whereas people excel.

Simply put, AI doesn’t need to revolutionize the legal landscape in order to be considered a positive disruption.

We already mentioned that AI has disrupted legal. Thanks to it, lawyers spend less time, energy, and money dealing with data, processing documents, and completing other routine busywork. It can be argued that these improvements are already positive, but frankly speaking, something can only be a positive disruption if it generates additional value.

Even if a lawyer saves 80% of the time they normally spend drafting a contract, although it’s cool, it’s not positive if the lawyer then does nothing. Instead, for it to generate value, the lawyer must do something more, something that an AI can’t do, such as finding ways to resolve conflicts or interpret grey areas in a sympathetic or empathetic manner.

Something can only be a positive disruption if it

Think of AI as similar to a tractor. Tractors never replaced farmers. Instead, they’re an all-purpose workhouse that enables its operator to cover much more ground, which in turn maximizes the potential harvest or yield.

AI is much the same. It will never replace lawyers and paralegals. Instead, they will enable legal teams to work with more clients while efficiently processing mountains of documents.

Many GCs and legal professionals are getting ready for significant disruption. In 2019, a survey reported that a majority of individuals questioned believed that tech would disrupt the legal industry in a positive way, if it weren’t already doing so.

One of the disruptions on the way?

Something to remember is that it’s possible for a single product, company, or service to experience all four types of innovation. We used Netflix as an example of disruptive innovation, but it has experienced its fair share of the other three types. One of the hardest aspects of innovation is the need to keep innovating. Failure to do so leads to stagnation, which in turn drastically increases the likelihood of a company’s collapse.

Within the legal industry, it may seem challenging to find ways to innovate, but as the world of legal tech develops and matures, the opportunities will quickly multiple. Now is the time, while most are still trying to understand what’s expected of them in the future, to get ready. AI is a positive disruption that has the power to transform not just how we conduct our business and legal affairs, but also the who, what, where, and when.

Will VC Funding Catch Up To Record Year For U.S. Weddings?

Computer Aided Dispatch (CAD) Market to Expand at a 11.2% CAGR

Warning: unlink(/tmp/jnewsfirstload-y4y1As.tmp): No such file or directory in /home/syyfiiaq/satoripulse.com/wp-admin/includes/class-wp-filesystem-ftpext.php on line 142