Warning: unlink(/tmp/jnewslibrary-qhF40U.tmp): No such file or directory in /home/syyfiiaq/satoripulse.com/wp-admin/includes/class-wp-filesystem-ftpext.php on line 142


This group will form the world’s first “Network State” — a concept Srinivasan calls “the sequel to the nation state.”

Critics have long accused technologists of harboring world-dominating ambitions. “The Network State,” which Srinivasan published on the 4th of July, articulates these ambitions in plain, unapologetic terms. The “State” is dying, he writes, having served its function displacing God as the leviathan of the 20th century. We have now entered the era of the “Network,” and the conflict between the dying State and the emergent Network will come to define this moment in history.

Whatever you think of this prediction, “The Network State” has undeniable appeal among some of the most powerful figures in tech. Marc Andreessen endorsed Srinivasan as producing “the highest rate of output per minute of good new ideas of anybody I’ve ever met.” Ethereum co-founder Vitalik Buterin said, “[W]e’ve started new currencies … ‘The Network State’ shows us how to start new cities and new countries.” And Coinbase co-founder Brian Armstrong confidently proclaimed, “Balaji will be right about ‘The Network State.’”

A Twitter search for “network state” brings you to a near-endless wall of discussion among true believers. They are almost all men. Some have “.eth” appended to their usernames. Approximately one in every 20 sports a Bored Ape avatar.

Srinivasan presides over this digital domain as a philosopher king, dispatching 280-character edicts on topics ranging from transhumanism to effective altruism. After completing a doctorate in electrical engineering at Stanford, he went on to co-found four companies, lead a16z’s expansion into biomedicine and blockchain and serve as CTO of Coinbase. These credentials — as well as his Twitter following of nearly 700,000 — place him in a rarified cohort of Silicon Valley thought-influencers that includes Naval Ravikant, Chris Dixon and Paul Graham.

This positioning is precisely why “The Network State” is so important: It isn’t just a thought experiment, but a blueprint that, however right or wrong, will inform how powerful tech leaders interact with governments for years to come. Srinivasan instructs technologists to treat traditional nations as a collapsing impediment whose demise ought to be accelerated to make way for a superior alternative. But if “The Network State” is a technologist’s dream, it also suffers from a technologist’s blind spots: The humanities become “grievance studies departments,” religions are reduced to utilitarian organizing principles that can be swapped wholesale for cryptography and our understanding of the past becomes a straightforward battle between “technological truth” and “biased, noisy” written history.

In Srinivasan’s view, the United States is controlled by the media — in particular, The New York Times, which makes no fewer than 59 appearances in his book.

The media establishment, Srinivasan claims, embodies left authoritarianism, consisting of a “woke” ruling class that also includes professors, activists and bureaucrats. He draws on Curtis Yarvin’s idea of the Cathedral for this conception of power. But where Yarvin, a right-leaning monarchist often associated with Peter Thiel, considers the ruling class a permanent fixture that simply needs reform, Srinivasan believes the world would be better off without it. Journalists, he writes, are “fundamentally just dogs on a leash, hit men for old money, assassins for the establishment.” Bureaucrats, he adds, get off on wielding state power over others, while status-obsessed academics preside over their “grievance studies” fiefdoms.

This establishment fears the disruptive power of technology, and especially decentralization, Srinivasan claims. Because the establishment wants to “turn back the clock on all those things that have disrupted their political control,” the legacy media rails against technology and wishes it could “jam social media and the internet back into the garage.” This bias is supposedly an open secret occasionally admitted in unguarded moments, as when a New York Times op-ed called for Big Tech to share a greater portion of ad revenues with local newspapers.

Media and political elites will never get along with tech types, he says, because there’s a psychological difference between “people who focus on what is true” and “those who care about what is popular.” Srinivasan of course identifies the media and political elites as being fixated on popularity over truth, not his sphere of VCs who clamored over one another to invest in Juicero, WeWork and Theranos. This oversimplified distinction is especially surprising coming from Srinivasan given his frequent citations of Stanford philosopher René Girard. Girard, recently popularized in Silicon Valley by Peter Thiel, stipulates that it is in human nature to “desire what others desire because we imitate their desires.”

But tech and media are both competitors and close partners, we’re told. Watching mainstream outlets post stories about Big Tech is like “seeing Coke attempt to gain market share from Pepsi by ever meaner blog posts,” Srinivasan said in 2020. He also argues that, as the power of the U.S. government has declined, the media has shifted from appealing to government authority to instead appealing to Big Tech. He sees this behavior exemplified in media calls for deplatforming or content moderation.

Srinivasan’s hated “establishment,” then, doesn’t exactly fear technology, which can be used as a tool of coercion, but instead decentralization specifically. The ultimate goal of the American establishmentarian, as he sees it, is to use the State as “a club to coerce people (for their own good of course), to maybe get a little budget along the way, and to finally ‘change the world’ by changing the policy.” Decentralization threatens this process, he says: “People of the Network start by thinking about getting a piece of the network to call their own,” meaning the primary goal of the technological progressive “is to build — and for no one to have power over them.”

Srinivasan has a habit of giving the Network credit any time technology produces desirable outcomes while assigning blame to the State for everything else. With San Francisco, for instance, the city government bureaucrats managed to “turn the city into a hellhole” by using the power of the State. They pulled this off “despite how competent the tech founders of SF were on the Network.” Fortunately, Srinivasan tells us, remote work and the resultant “techxit” gives the people of the Network a chance to fight another day — eventually in the first Network State, which will serve as “a blank sheet of paper, an empty text buffer, a fresh startup, or a clean slate.” So the reader is meant to believe that whatever went wrong with San Francisco, social media and so on does not have to do with tech or technologists, but with everything that came before them.

The Network State will be tech’s first chance at “something new without historical constraint.” If this sounds utopian, that’s because Srinivasan insists it can be: Rather than arising from a violent colonization of indigenous people, the Network State will simply crowdfund new territory as a “peaceful mechanism for territorial expansion.” Rather than file tax reports, income will be earned and recorded on the blockchain, leading to full transparency. Instead of holding coercive democratic elections, subscriber citizens will vote on-chain and effortlessly abandon the state if they so desire.

Srinivasan even imagines competition between Network States will be akin to “the same way people left Blockbuster for Netflix,” such that the more innovative state inevitably wins out. 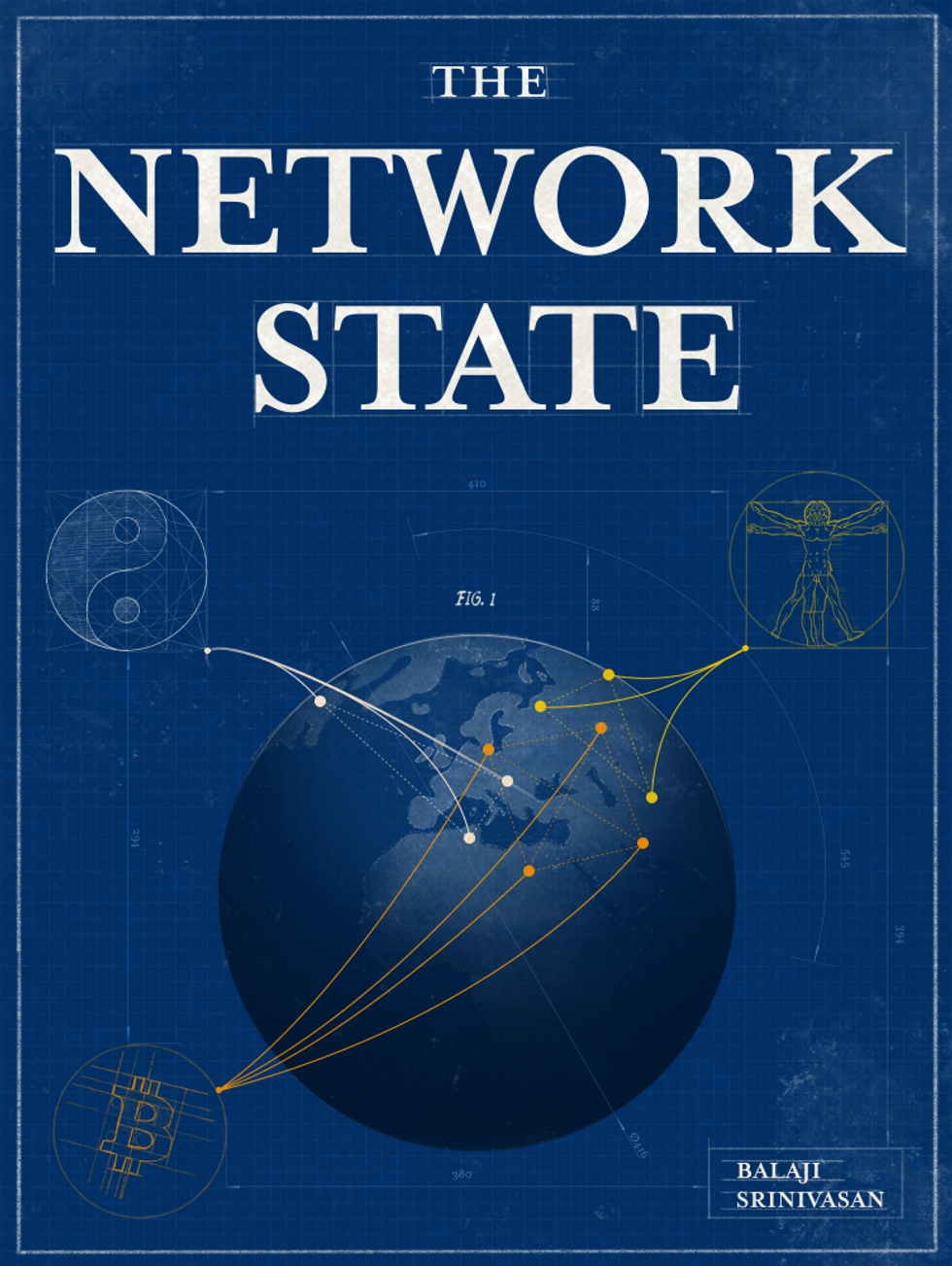 Altogether, this is supposed to allow people to “opt-in to build their own vision of utopia.” Srinivasan doesn’t seem to see the potential for this to devolve into anarchy. He rightly identifies the social contract as requiring compromise, but then goes a step further by declaring all forms of compromise bad. If your cannibal neighbor decides to join a Network State with legalized cannibalism, it may be his version of utopia, but it makes neither for a safe neighborhood nor a functioning society.

Blood on the blockchain

One might ask why the U.S. or China — or any country, for that matter — would be willing to cede parcels of land to a group of blockchain enthusiasts.

After all, not all forms of land ownership are equal. When you own land within the U.S., for example, you still pay property taxes and must abide by U.S. laws. Your ownership is contingent on the continued existence of the U.S. — your taxes fund the military that deters foreign invaders, not to mention the water that flows through your pipes, the police that patrol nearby streets and the construction workers paving the surrounding roads.

Traditional nations would likely be particularly wary of these blockchain enthusiasts given their explicit aim to topple the existing world order. Mind you, these are nation states that collectively spent $2.1 trillion on militaries last year, which doesn’t even include government spending on programs with indirect military applications. If a “subscriber citizen” physically living in Russia or Brazil decides to join a Network State and renounce their citizenship, what is the Network State going to do if Russia or Brazil says, “Thanks, but no thanks”? And why wouldn’t a country say no, as it would mean giving up income tax and any territory owned by those citizens?

In the face of all these challenges, Srinivasan maintains that “a startup society with five million people worldwide, thousands of square miles of (discontiguous) community-owned land, and billions in annual income would have indisputable numerical significance.” This significance, he says, will let the society bargain for national sovereignty and acceptance into international organizations such as the United Nations, African Union and European Union.

Instead of engaging directly with these tricky questions, Srinivasan evades them by insisting Network States only need to win a war over minds. Encryption, he claims, will eventually prevail over state violence because secure communications “means nothing less than the ability to organize groups outside state control, and thus a diminution in the power of states to control.” Once founded, the Network State experiment can ensure its continued existence through a “historical/moral critique of the present system that delegitimizes State violence against them and allows the experiment to continue.”

In the end, Srinivasan struggles to provide compelling reasons for why the Network State can or should exist. The legions of true believers in the upper echelons of the tech world don’t seem particularly concerned by these questions. Even as we’ve experienced somewhat of a crypto winter since the book’s July publication, Srinivasan’s appeal has only continued to grow. Next week, he’s set to headline the Urbit confluence in Miami.

Still, there are a few limited critiques from within. Buterin, for example, wrote a favorable review but warned that poorly constructed Network States would only serve the interests of the wealthy. “Chaos Monkeys” author Antonio García Martínez — whose hiring at Apple sparked an employee backlash — said deeper convictions are needed to build a new nation, even as he said Srinivasan describes “a de facto reality that’s only accelerated with the post-COVID crackup.”

Altogether, “The Network State” is sure to have a significant impact on the future, even if the actual implementation of its ideas doesn’t go far. The power of the book therefore doesn’t necessarily reside in its feasibility, but its appeal.

Are Scientific Conferences Really Worth the Time and Money?

Warning: unlink(/tmp/jnewsfirstload-2I7Vvq.tmp): No such file or directory in /home/syyfiiaq/satoripulse.com/wp-admin/includes/class-wp-filesystem-ftpext.php on line 142