Key Industries and Preferential Zones to Set Up


We discuss the factors that make investing in Dalian a viable option for international corporations wishing to open a Chinese company. Dalian is a leading manufacturing center and port in Northeast China.

Dalian is a major sub-provincial port city in Liaoning Province in Northeast China. It is also an important central city and scenic tourist city on the northern coast of China.

Located at the southern end of the Liaodong Peninsula, Dalian is the southernmost city in Liaoning. As a twin star city alongside Shenyang (the provincial capital of Liaoning province), Dalian’s urban economic development has surpassed that of Shenyang in recent years to become the major economic hub in Liaoning Province. Although the heavy industrial economy of the northeastern provinces has seen a downturn in recent years, Dalian has bucked the trend by creating new growth points.

As a financial, HR, shipping, and logistics center for East Asia, Dalian has always held appear for foreign firms. The city’s modern services sector includes human resources and financial services and main industries include shipbuilding, machinery, chemicals, oil refinery, textiles, and food processing. Dalian boasts of a deep-water port and is among China’s crucial foreign trade ports. Overall, the city has a beautiful environment, favorable location, and strong industrial base. Its advantage as a seaport city and HR center are the most attractive features for overseas investors. 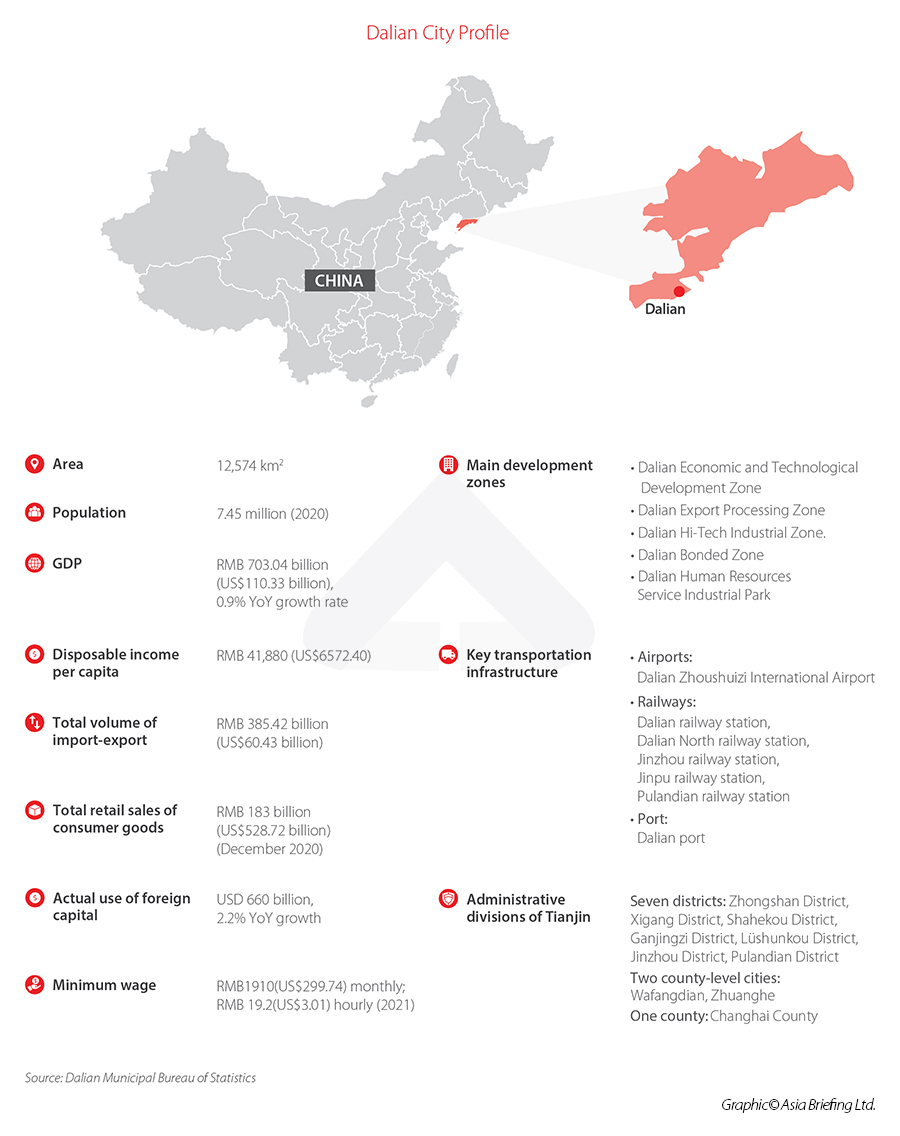 On January 10, 2022, Dalian Development and Reform Commission announced that Dalian’s GDP in 2021 is expected to be about 760 billion yuan, an increase of about eight percent. On May 19, 2021, the Dalian Municipal Bureau of Statistics released the economic performance of Dalian in 2020. It was the only northeastern city in the top 30 contributors to the national GDP in 2020. 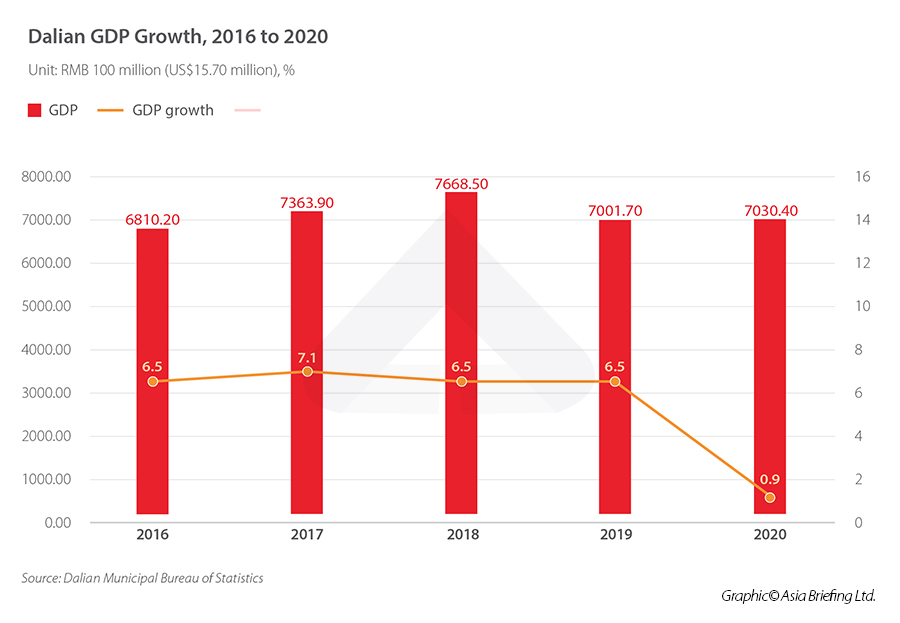 In 2020, the contribution of the primary, secondary, and tertiary sectors to Dalian’s GDP growth was 6.53 percent, 40.04 percent, and 53.42 percent, respectively. As an important engine for the stable growth of the regional economy, the tertiary/services sector is the main reason for the relative decline observed in 2020 due to the pandemic.

However, as the disease prevention and control situation continue to improve, 2021 economic indicators showed a rebound in performance. In the first three quarters of 2021, for example, Dalian’s tertiary sector’s added value was RMB 291.61 billion (approx. US$45.72 billion), showing a year-on-year increase of 8.2 percent.

The General Administration of Customs, however, stated that despite Covid-19’s impact on foreign trade imports and exports in the short term, it is optimistic with the resilient foreign trade development and strong adaptability of enterprises in Dalian in the long run. Relevant departments have successfully introduced a series of policies and measures to support Dalian-based enterprises in overcoming difficulties.

According to the data from Dalian Development and Reform Commission, Dalian’s actual direct use of foreign capital is US$1.67 billion US dollars in 2021, an increase of 153 percent. In 2020, there were 247 new foreign-invested enterprises, and the newly increased foreign capital was US$2.03 billion. There were 18 newly approved foreign-funded projects with a total investment of more than US$10 million, including two projects with an investment of more than US$100 million. The actual use of foreign capital was US$660 million, an increase of 2.2 percent over the previous year. Hong Kong, Japan, Germany, the British Virgin Islands, and Singapore rank as the top five sources of foreign capital.

Dalian is an important industrial city in north China. Among the 41 industrial categories established by China’s national statistics, Dalian has industries belonging to 34 categories.

In recent years, Dalian has paid equal attention to industrial restructuring and transformation that follows the path of high-quality development. From 2017 to 2019, Dalian’s industrial added value maintained a double-digit growth rate, ranking first among sub-provincial cities in terms of the growth rate. A sub-provincial city (division) in China is a prefecture-level city governed by a province promoted by half a level. China now has 15 sub-provincial cities: Guangzhou, Wuhan, Harbin, Shenyang, Chengdu, Nanjing, Xi ‘an, Changchun, Jinan, Hangzhou, Dalian, Qingdao, Shenzhen, Xiamen, and Ningbo. In 2020, despite the increasing downward pressure on the industrial economy due to the Covid-19 pandemic, Dalian still recorded industrial growth. The added value of industries above the designated size increased by 3.8 percent yearly. Industrial enterprises above the designated size refer to enterprises whose annual output of RMB 20 million (approx. US$3.13 billion) or more is from their main business.

Dalian’s HR service industry has become a core component of the city modern services sector. As of 2019, Dalian has 509 HR service organizations, accounting for about half of the Liaoning province, employing about 13,000 people, and having an annual operating income of nearly RMB 10 billion (approx. US$1.75 billion).

In 2021, the “Fifth Dalian Human Resources Service Innovation and High-end Development Summit” was successfully held. The summit condensed the essence of the industry and demonstrated the market’s vitality. It has become the only comprehensive exhibition event for human resources services in China’s Northeast.

Dalian’s HR service projects have also been moving towards precision and diversification with the improvement of service capabilities. The service products extend from the traditional job introduction, labor dispatch, and personnel agency to the high end of the value chain. Specifically, it includes action plans, such as cultivating key enterprises and leading talents, constructing industrial parks, and Internet and HR services to promote the rational flow and optimal allocation of human resources.

For example, the HR departments of Ernst & Young and Unilever are in Dalian. HR jobs such as recruitment, leave management, and payroll processing are all done remotely in Dalian. Dalian’s HR service business has formed an agglomeration effect.

Where to set up in Dalian

It has formed three hundred-billion-level industrial clusters in petrochemical, equipment manufacturing, and electronic information, and six ten-billion-level industrial clusters in biomedicine, new materials, automobiles and parts, modern metallurgy, semiconductors, and food processing. More than 3,500 foreign-invested companies from 49 countries are invested in the zone, including 73 of the world’s top 500 companies. A total of 91 projects have invested, and more than 40 projects with a total investment of more than US$100 million. World-class companies such as Intel, BorgWarner, Pfizer, ThyssenKrupp, Fuji Iceberg, Yamazaki Mazat, Volkswagen Engine, Shilla Auto Parts, etc., have settled in the development zone.

Dalian High-Tech Industrial Zone was the first batch of national high-tech industrial development zones approved by the state in March 1991. It is the core area of ​​Dalian’s high-tech industry base and the pilot area of ​​Dalian’s opening and ​​science and technology. The zone currently focuses on key high-tech fields, such as electronic information, mechatronics, new materials, bioengineering, high-efficiency energy-saving, and environmental protection.

More than 100 Fortune 500 companies, such as IBM, HP, Ericsson, and Dell, have accounted for foreign investment worth US$290 million.

Dalian Bonded Zone is in the Jinzhou District of Dalian City and was established with the approval of the State Council of the People’s Republic of China in May 1992. It boasts of being a comprehensive economic region with the highest degree of openness and the best policies in mainland China. The Dalian Bonded Zone is now China’s largest free trade zone. It is the country’s only special supervision zone that integrates the management of a bonded zone, a bonded port area, and an export processing zone. It has attracted some leading industries, such as electronics, machinery, and plastics.

NEarly 1,000 companies from more than 30 countries and regions, including Hong Kong, the United States, Japan, South Korea, Singapore, Taiwan, and Canada, had invested in the Dalian Bonded Zone.

In order to attract foreign investment and create a good business environment in Dalian, the city’s government has formulated and issued the “Several Policies and Measures for Expanding Opening-up and Actively Utilizing Foreign Capital in Dalian“. The city also issued the “Notice of Dalian City on several Measures to Accelerate the development of human Resource Service Industry” to promote the development of its human resources sector.

For newly established foreign-funded manufacturing enterprises and modern service enterprises, rewards will be given to the enterprises and senior management personnel based on the actual paid-in registered capital, operating income, capital increase, and production expansion.

Support policy for foreign investment in the establishment of headquarters:

Different amounts of rewards and office subsidies will be given to enterprises and senior management personnel for newly established regional headquarters, according to different industries, operating income, capital increase, and production expansion.

Support policy for foreign investors to carry out R&D cooperation:

For foreign investors carrying out scientific research and innovation cooperation in Dalian, the government will provide different subsidies according to the number of personnel, various preferential tax policies, and convenient service measures for R&D personnel.

Foreign equity investment enterprises that invest in scientific and technological innovation enterprises in Dalian will be rewarded to their managers according to the level of investment.

Encourage the implementation of industrial land supply methods, such as flexible transfer, long-term lease, first lease and transfer, and combination of leases and leases to reduce the cost of land use for enterprises.

The government will provide subsidies to support foreign-invested enterprises to list on the Main Board, SME Board, Growth Enterprise Market, and overseas in accordance with laws and regulations.

Support policies for fair competition between foreign-funded and domestic enterprises:

In the development zone, priority is given to introduction of internationally renowned arbitration agencies, law firms, accounting firms, certification agencies, evaluation agencies, and other intermediary services. Policy support is also given in terms of office space, talent introduction, and entry and exit convenience. The government also simplifies the guidelines and management procedures for foreign-invested projects.

China Briefing is written and produced by Dezan Shira & Associates. The practice assists foreign investors into China and has done so since 1992 through offices in Beijing, Tianjin, Dalian, Qingdao, Shanghai, Hangzhou, Ningbo, Suzhou, Guangzhou, Dongguan, Zhongshan, Shenzhen, and Hong Kong. Please contact the firm for assistance in China at china@dezshira.com.

Do You Still Believe These 16 Ridiculous Tech Myths?