Does technology hold the key to better cashflow?

Cash, as they say, is king. The observation rings true in any industry, but especially in construction, where cashflow is among the most frequently cited issues when construction companies go to the wall. Many firms that enter into administration have orders on their books and the skills to deliver, but get into difficulty because they must routinely meet costs upfront – and then wait months to receive balancing payments.

Poor payment practices are as old as the hills, and endemic in the industry. Solutions have been debated endlessly, yet late payment remains. Ambitious visions, such as the creation of project bank accounts – which put money from clients into trust for direct payment to subcontractors – promise to fix the slow trickle of cash through the supply chain. But, despite backing from government, project bank accounts have failed to gain widespread traction.

Could the increasing adoption of digital payment systems across the industry begin to chip away at the issue by modernising the way that paying and receiving firms manage their cashflow, thereby bringing greater transparency and certainty? A Construction News roundtable discussion, chaired by editor Lem Bingley and sponsored by technology provider Payapps, assesses the role of tech in fixing an age-old conundrum.

Early adopters of digital payment systems have seen quantifiable benefits, not just for their own operations, but for clients and their supply chain as well, says Tim Embley, group research and innovation director at Costain. He says the tier-one contractor began to supplant manual payment processes with digital systems more than a decade ago.

“We’ve had some significant savings by implementing automation and robotics into the payment process,” he notes, adding that the focus has been on removing opportunities for human error. In turn, this means “efficiency is being gained by putting those people into better positions and getting the technology to do the hard work”.

Embley adds: “Over the last 12 years, we’ve needed to understand how technology can enable us, as a business, to change our business model, to work with our partners. We very much believe in an integrated supply chain, working very closely with our partners and investing to make sure that they become more efficient and effective. In terms of payment for us, it’s about making sure that we’ve got the right platforms in place, and making sure payments are passed through efficiently and correctly through the supply chain.”

Gareth Simm, chief executive of mechanical and electrical contractor HE Simm Group, says his company has recently embraced digital payment systems and begun to reap the benefits. But he cautions that there can be teething problems. “The first hurdle was the smaller subcontractors and how they would embrace it,” he says. “We went about it by setting up a working group and we split them up into different areas of focus. [We] spoke to all of the supply chain and told them what we were going to do and asked what their fears were.”

Simm reports that the most common concern raised by subcontractors is the potential cost of moving from traditional invoicing methods to a specified digital process for submitting payment applications online. “That was a big thing because some of these companies are one-man bands,” Simm says.

The solution was to make the benefits clear – such as greater clarity about when a pending payment would arrive, visible via the same online portal. “Now they’ve got the payment certainty and efficiency, and they can concentrate on putting pipes and wires on site, they’re all right behind it – and they’re actually now promoting it,” he adds.

Angus McAlpine, Payapps head of partnerships in the UK & Ireland, agrees that many in the sector are still poorly informed about the potential benefits of digital payment systems, even among firms that are forward-looking in other ways. “[As an industry] we look at innovating onsite, and what those [practical] functions are, but we ignore the back office,” he observes. “Modernising payments is all part of back-office efficiency and making companies leaner in the way they work.”

Engineering firm Michael J Lonsdale is another specialist contractor that has introduced digital payment systems. Stuart Talbot, the firm’s commercial director, says that transparency and predictability are benefits seen on both sides of a transaction. Like Costain’s Embley, he cites the benefits of moving away from dependence on individuals towards a more automated business process. He says: “It’s not, ‘I sent this email and now this or that person is on holiday’. It’s there, and we all know that [an invoice] has been submitted. They’ve got assurances that their [payment] application has been received. That was the major selling point for us.”

Like Simm, Talbot adds that smaller providers require reassurance. Even after rolling out its digital payment processes, Michael J Lonsdale still allowed smaller subcontractors to submit invoices in existing formats – such as Excel spreadsheets – albeit through the new digital portal. “They had confidence because they’d still done it their own way, but we also supported them,” Talbot explains. “Over a two- or three-month period, they stop [submitting Excel files] because they can see it’s actually replicating what we’re doing. So it’s all-around comfort.”

Simm says that the return on investment achieved by moving to digital payments across HE Simm Group has surpassed expectations. “Our business case initially was around return on investment [from] a 50 per cent increase in efficiency,” he recalls. “We had three people full-time on subcontractor payments. We are far in excess, now, of that 50 per cent. What’s more, our supply chain now knows when they’re going to get paid – they can see that everything is standardised. All the piles of paper where things go missing, that’s all gone.” 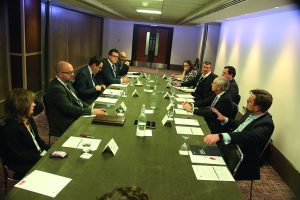 David Hancock, construction director in the Cabinet Office, says that larger firms have a responsibility to help their supply chain, and should adopt modern payment processes as a part of their business ethics and corporate social responsibility policies. “I think it’s morally wrong for SMEs not to be paid [promptly],” he says.

Hancock adds: “I was one of the people who brought in project bank accounts, which some people love and some people hate. But the thing is, [they are] a sticking plaster […] It’s not really what we want to do, but it allows the flow of money to the SMEs. So, until we have something that would replace that with something better, we will be advocating project bank accounts for all our major projects.”

Another intervention by government has been the move to publish pipelines of upcoming work, which might also help to unstick cashflow in the long term. Marie-Claude Hemming, director of operations at trade body the Civil Engineering Contractors Association, says: “Having visibility of payments and visibility of work coming up enables you to invest in your business because you know that work is coming up in a couple of years. It produces more stability and enables you to be more innovative, take some risks and look at new solutions.”

Carol Williams, Europe hub head of procurement at Laing O’Rourke, who previously worked in the defence sector, says the need for broader adoption of digital payments in construction is clear. “When I joined the construction industry, I saw that there’s some fantastic engineering that goes on and some amazing outcomes,” she recalls. “But when it comes to IT, that’s not the industry’s sweet spot. When you come from a different sector and you walk into [construction’s] world of customisation and bespoke and tailored, a few red flags go up. I think that’s people being a little bit nervous about introducing new technologies.”

Another issue is whether digital payment systems make sense for all companies involved in a construction project. The efficiency gains for large contractors may be clear, and improved predictability and visibility may be advantageous for subcontractors, but what about clients?

Embley says Costain is seeing adoption of digital payment processes among its blue-chip customers. “They’ve been going through quite a significant and accelerated journey in their digital transformation,” he notes, suggesting that the trend among big developers will have a knock-on influence on contractors.

Payapps’s McAlpine says: “From a developer’s perspective, […] if I know I’ve got contractors on my site using [digital payments], in theory I’ve got a transparent tool being used by everyone. Those relationships should therefore be stronger than would otherwise be the case, because there is that ‘right’ process in place.”

Coryn Martin, project director at developer Quintain, agrees that there is value in payment visibility throughout the supply chain. “We’ve got systems in place so that we pay our principal contractors safely and securely,” he says.

With central government telling public bodies to focus on social impact and outcomes rather than upfront costs, greater scrutiny of payment performance is also on the cards for public sector contracts. The Cabinet Office’s Hancock says: “What I’d like [as a client] is actually to have the digital evidence to be able to understand who’s getting paid and when they’re getting paid, so that we as a client – as a big client – can go to those [tier-one contractors] and ask why it’s not being done.”

As the roundtable debate highlights, more widespread use of digital payment systems may begin to ease cashflow issues – with expected benefits likely to differ for different parts of the supply chain. But if such systems are to become the norm, the pros and cons of digital payment do need to become much more widely understood.

Payapps senior business development manager, Anthony Puma, says a key barrier to the adoption of digital payments is “technology fatigue”. In the past, companies may have invested in ambitious enterprise software systems that overpromised and underdelivered, resulting in a reluctance to repeat the experience.

He argues that more focused technologies have a better track record. “Sometimes you do have to look at and consider separate areas around the business, and where you’re going to get those efficiency gains,” he suggests. “From a technology perspective, we’re seeing a sea change, with businesses looking at core elements of their particular processes and in particular departments, and saying, ‘Well, what more can we get from that in terms of real efficiency gains?’”

Laing O’Rourke’s Carol Williams suggests that reluctance to roll out back-office systems may also be a matter of priorities, particularly among firms that lack the capacity to innovate on multiple fronts simultaneously. “[You might] be choosing between the IT systems that enable the back office or modern methods of construction,” she notes. “If [smaller firms] are investing more in the modern methods of construction and how to get there, then they aren’t necessarily in the IT space. When you’re a main contractor, you’ve got more bandwidth to look at the bigger picture.”

Puma responds: “SMEs within the supply chain […] are almost regarded as not switched on. From our experience of working with SMEs that work as subcontractors appointed by main contractors, they are in fact the complete opposite – by being forward-thinking and willing to embrace technology that serves tangible benefits to run their business for efficiencies. In some cases, smaller companies utilise more technology and benefit from more efficient ways of working than their larger peers.”

Tech Master Musk Defends an Industry Under Threat From Technology